My name is Catriona Callaghan. I grew up just outside Kells in Co Meath

My family are all farmers and food producers. I’m very proud and privilaged to have grown up as a farmer’s daughter. We (that’s the way it works, farming isn’t a one man show, it’s a family affair) grew potatoes, grain, produced beef, produced lamb…we could be classed as a one stop shop for your meat, potatoes and 2 veg no problem. I grew up knowing where food comes from and more importantly the work involved in getting it on the plate.

As a youngster I was much more interested in the farming end of things than working with the final produce. At a young age the cooking end of things did not have the same appeal to me as what was going on out in the yard. Fast forward a few years, well more than a few. I married a farmer, sheep farmer to be exact, which was a good move as I love lamb. We have 3 boys, who just like me when I was young, love nothing more than pulling on the wellies at any given opportunity. 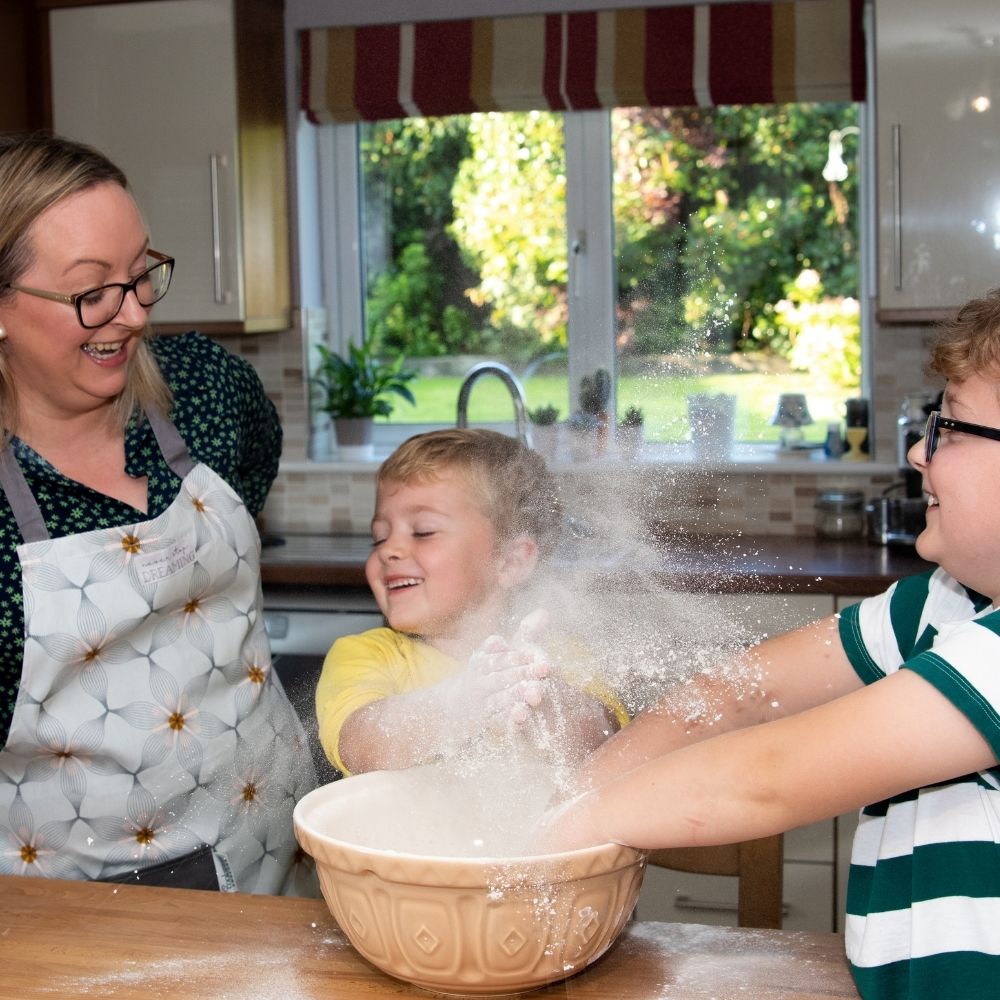 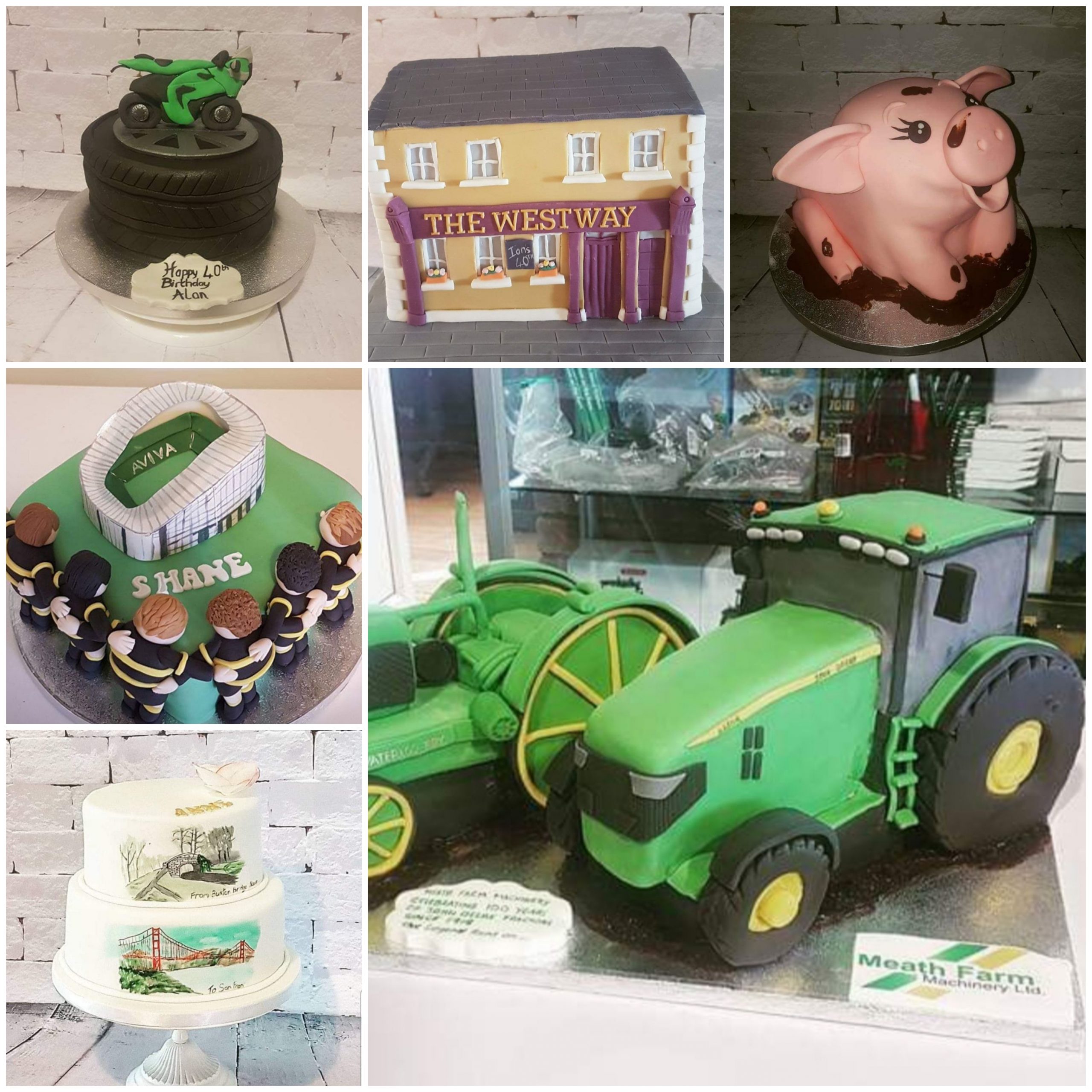 I have always had a love of art, so when the kids were old enough to describe in detail the type of birthday cake they wanted, I figured of course I can make the rugby pitch you described from cake and icing. Well I could…that was the start of the annually more complicated requests from them and a love of cake making for me. I then had some requests to make cakes for others and that was where my little cake business, The Bunnery, was born. I began with a stall at the local farmers market in Kells, selling cupcakes and other treats, then progressed to making birthday cakes, wedding cakes, all occasion cakes. This continued for a few years, along with raising 3 active boys and being part of a busy farming family. I always had this idea at the back of my mind that I would love to someday teach baking/cooking classes. I am completely self taught and have really enjoyed explaining to my boys how to make different things and at this stage I had built up quite a collection of recipes. My obstacles were financial and lack of confidence.

Then Covid hit, the boys came home from school on the 12th March. We were in the middle of lambing, no one realised then what was in store. Parties, weddings, all get togethers were cancelled therefore all my cake orders were too. Truth be told my kids were in their element, they got to spend morning, noon and night in the lambing sheds. A friend jokingly commented that I would have to start showing people how to make their own cakes. After landing in the door one day and throwing off the wellies the farmers, young and old..er wanted something to have with their cuppa. I took out the flour, butter, eggs and milk. I got a bowl, the boys washed their hands and we decided to make scones. I thought, ah here goes, I’ll take a few photos along the way and post them on Facebook.  Surely everyone loves a scone.  I had to be clever with the camera angles that day as one hadn’t done such a good job with the face washing. That recipe went viral on Facebook. Every time the boys returned from the sheds they were inquiring as to how many people had checked out their recipe now. In those first few weeks we received thousands of messages from people all over the world thanking us for the recipes, how it was keeping them and their kids busy during lockdown. People who never realised how simple it was to make delicious food. It was all very surreal at the time but all the boys had on their mind in between lambing was what will we bake next.  Brown soda bread, mars bar squares, brownies, flapjacks, etc. We baked together nearly every day and posted our recipes on social media. Home schooling wasn’t going the best, especially with the youngest so I figured between him reading the scrawl in my recipe book, weighing ingredients, chatting a bit about where the different ingredients all came from, surely that was English, maths and geography covered without him even realising it. What they did not also realise was that they were learning a really important life skill, that I think is so important for everyone to have, being able to cook the basics. At 13, 9 and 6 all my kids are really confident in the kitchen, which is something I’m quite proud of. 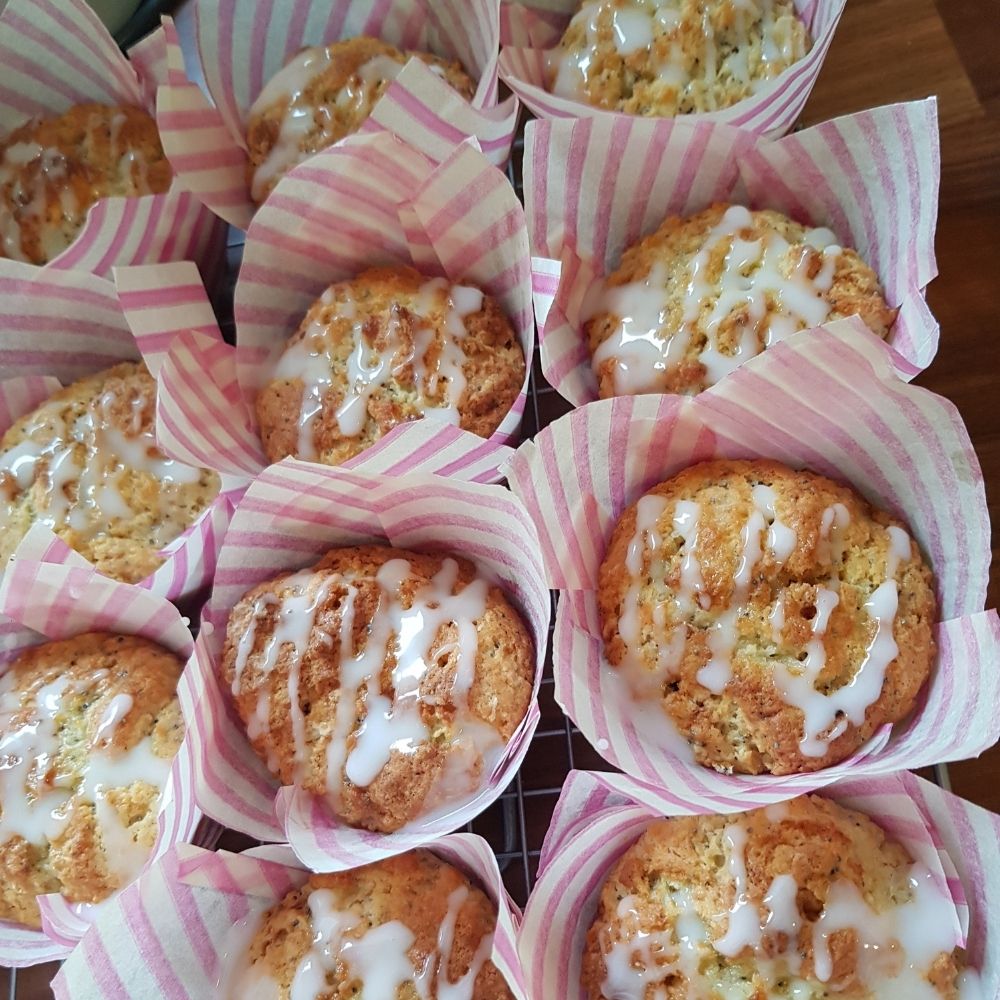 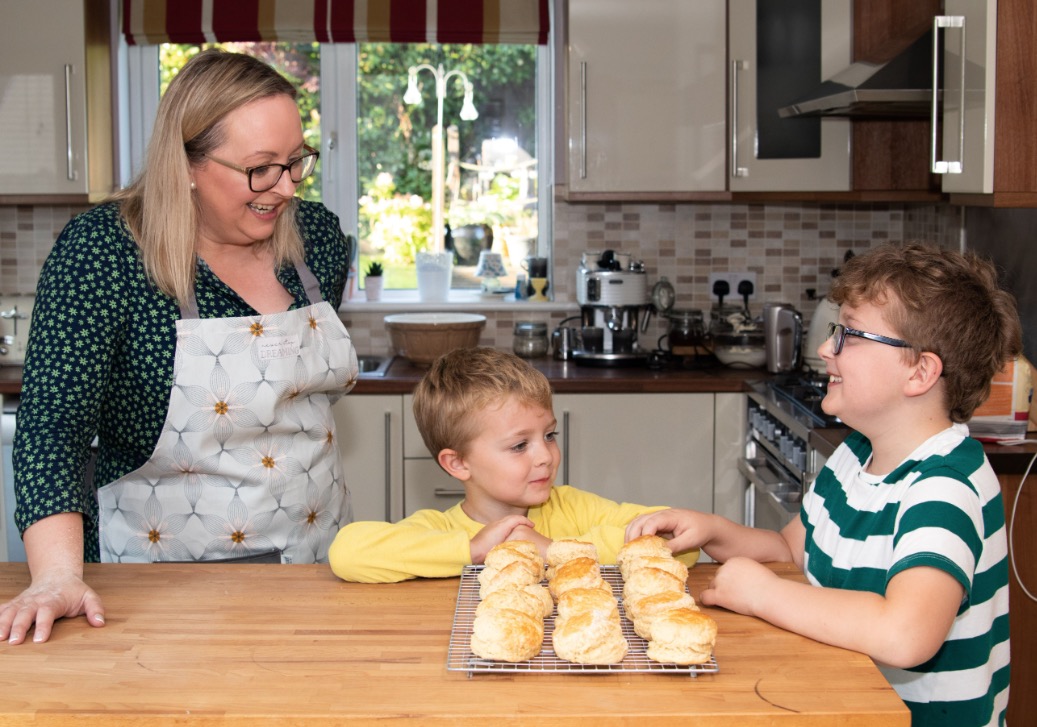 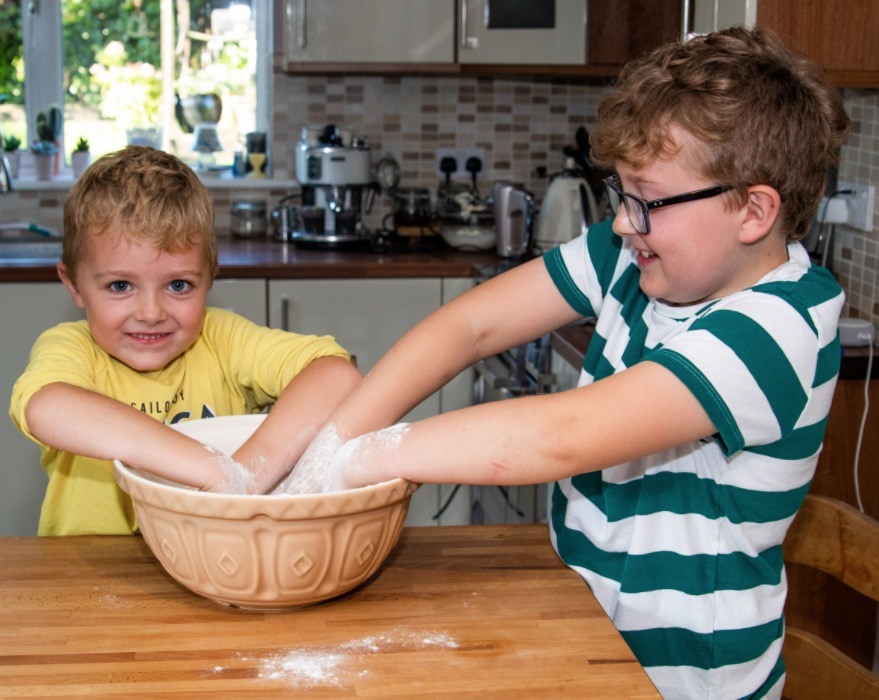 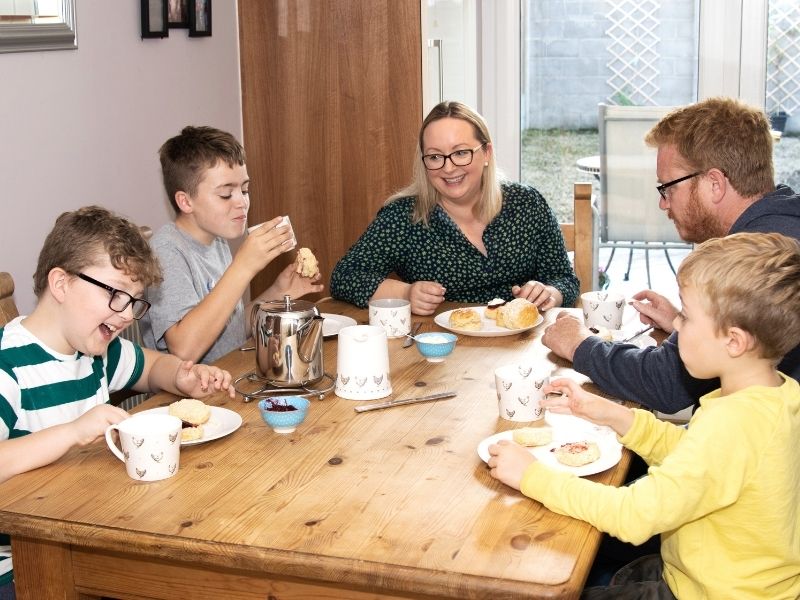 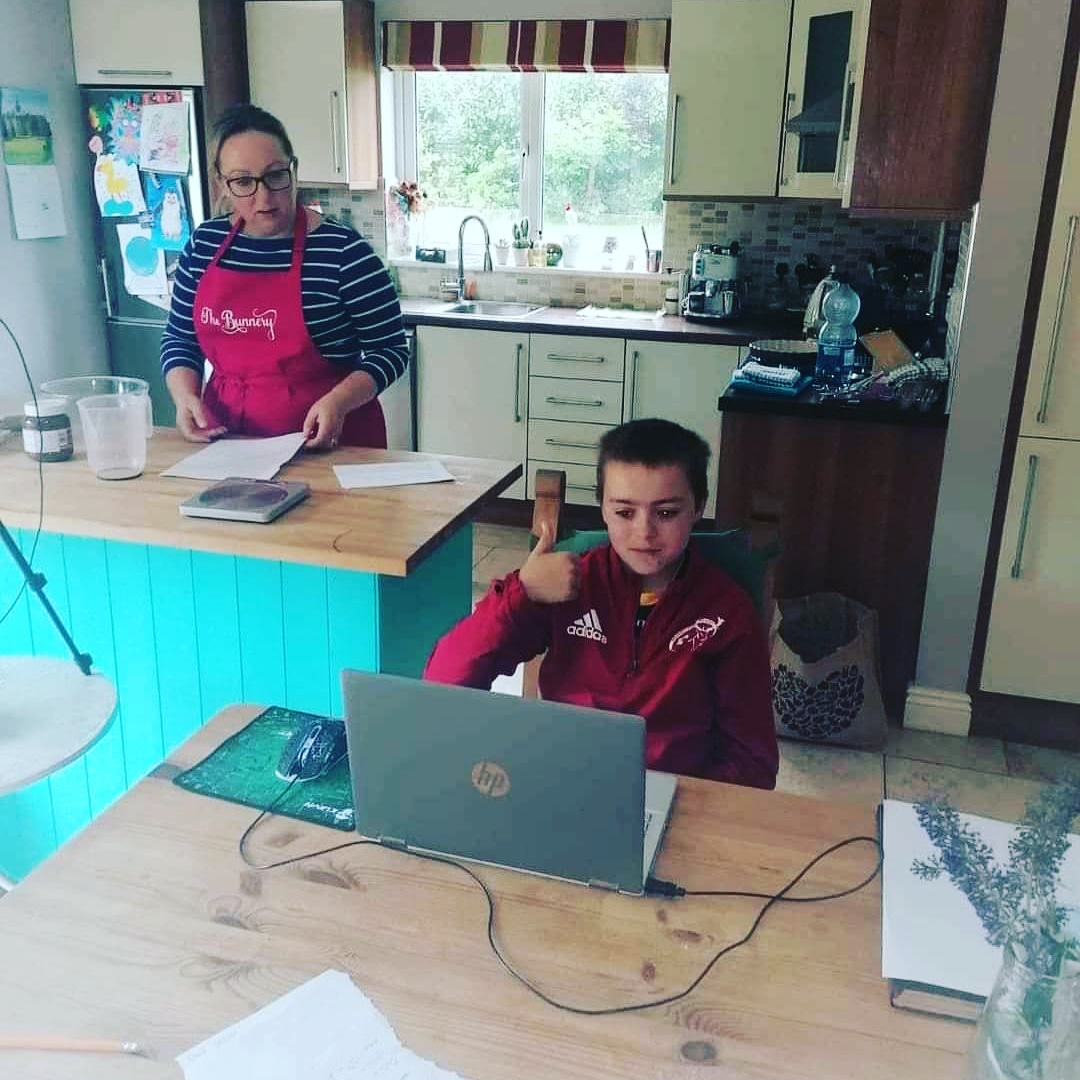 I realised then that people still needed birthday cakes. Just because the world had stopped in its tracks, birthdays still needed to be celebrated. As no cake makers were open, mams and dads baking skills were about to be put to the test. I remembered back to that very first rugby pitch cake I made and how daunting it seemed. So I decided why not teach people online to make their own celebration cakes. I made and decorated some cakes, took photographs and videos of the whole process and posted them to a private Facebook group. The feedback from people who joined the group was amazing.  People were so happy to be able to make a cake for their kids or loved one’s birthdays and they also seemed to love my way and style of teaching. When you make and decorate a cake for any occasion the delight in the face of the recipient makes it so worthwhile.  As the weeks went on, more and more people joined me on social media. Ideas for new classes began popping up. I had always loved the idea of having a cookery school but it was a dream which didn’t seem possible between finance and logistics. After taking part in the obligatory family Zoom quizzes I figured that was a platform that I could use to teach and deliver my classes. So without even knowing how it really worked I advertised for kids online summer camps through Zoom, the first week filled up nearly immediately and shortly followed by another and another. After a quick Zoom for dummies tutorial on YouTube I was all set. My 13 year old wanted a summer job so he became the tech/camera guy, we set up my mobile phone and laptop and we did 6 fun filled weeks of summer camps through Zoom baking and cooking something sweet and something savoury each day.  We had such fun with the kids. I loved receiving messages from parents who were really enjoying having lunch or dinner served to them every day for the week. I had one poor child who was woken up to take part at 5.30am every morning in New York. I had 2 cousins living in Austria and Germany who were both able to go to summer camp together. We cooked, baked, laughed, cried (long days make for a very tired and emotional mammy). I knew that this is what I want to continue doing, it’s what I always wanted to do. Teaching people in a simple way, using simple language with easily available ingredients and minimal equipment. People need to know where food comes from, how to use good locally produced in season food, go back to the basics and cook good simple food. If I can share with people how I achieve that in my own house they will very easily be able to do it in their house too.

Get in Touch
We use cookies on our website (we can also show you how to make some delicious ones) to give you the most relevant experience by remembering your preferences and repeat visits. By clicking “Accept”, you consent to the use of ALL the cookies.
Cookie settingsACCEPT
Manage consent

This website uses cookies to improve your experience while you navigate through the website. Out of these, the cookies that are categorized as necessary are stored on your browser as they are essential for the working of basic functionalities of the website. We also use third-party cookies that help us analyze and understand how you use this website. These cookies will be stored in your browser only with your consent. You also have the option to opt-out of these cookies. But opting out of some of these cookies may affect your browsing experience.
Necessary Always Enabled
Necessary cookies are absolutely essential for the website to function properly. This category only includes cookies that ensures basic functionalities and security features of the website. These cookies do not store any personal information.
Non-necessary
Any cookies that may not be particularly necessary for the website to function and is used specifically to collect user personal data via analytics, ads, other embedded contents are termed as non-necessary cookies. It is mandatory to procure user consent prior to running these cookies on your website.
SAVE & ACCEPT